If we look at last weeks’ media coverage regarding the economic crisis in United States and around the world we are tempted to believe that we are on the point of doomsday. It is yet obvious that media’s frenzy is backed by some reasons, starting with the Government’s interest in getting public support through committing public money to bail out private institutions and ending up with public fear regarding individual savings, dwellings, loans and economic future. What we need is an objective analysis of the economic turmoil that we are witnessing and of its consequences on our future.Global financial turmoil?

The first question on everybody’s lips is: are we facing a world economic crisis the way the world experienced between 1929 and 1933? The answer is yes. The world dimension of the economic crisis is very easy to notice considering the 25 per cent drop in value of the stock markets in Europe and in the USA and the 30 per cent shrink of the Hong Kong, Tokyo Bombay and Shanghai stock exchanges. In the past two months European countries, such as Italy and Ireland announced their economic recessions and by the end of the year the situation will become critical for many countries in Africa and Asia, which proves that the US financial crisis has rapidly become a global crisis.

Price fluctuations on oil and gas markets, value fluctuations of all foreign currencies are elements which will gravely disrupt sensible and important sectors of global economy, such as ground and air transportation and heavy industry. The fall of these business areas will attract further global economic disruption. Alitalia, a well Italian known carrier, is one of the companies affected by the economic crisis. Financial turmoil impacted negatively on other flight companies as well. From the beginning of this year, over 15 per cent of the world flight companies field for bankruptcy, according to the International Air Transport Association (IATA).

Real estate crisis spreads very fast from United States to Europe involving more and more markets and affecting one of the most productive economic sectors: constructions. Considering these elements we have to prepare and be aware that the worse is yet to come. Of course the financial crisis with negative impact on investors and consumers’ confidence is the most difficult issue. Credit squeeze sets limits to business development, housing purchase and even life standards of western European inhabitants. Taking all these effects into account we can safely assume we are looking at a world economic crisis.

We have to separate the crisis from the recession. Recession is the fall of all economic sectors not only of financial, housing and stock exchange areas. The economies of China, India and European Union are growing and US is likely to register economic growth   as well this year, so global economy is not in recession.  The current crisis is a development crisis not an overheating of the market as many have said. This is crucial to understand. Like in an illness a fault in diagnose could become a mistake in treatment with fatal consequences.

A few numbers show very clearily that the current global economy still has a lot of room to grow. According to UN data on living standards only 1.5 billion of people, of 6 billion in total, live in developed countries. This figure proves there is still a long way to an overdevelopment or overproduction crisis. It is very obvious that while we have billions of people living below the poverty limit in Africa, South East Asia, China, India or Indonesia we should not fear an economic overheating.

So this is in fact a crisis of undeveloped and over-speculative markets, for which financial market could be blamed. In the past years, 40 to 60 per cent of the financial transactions were speculative transactions. In stock exchanges also, instead of fulfilling their role of pumping money into the real economy, more than 70 per cent of the transactions are suspected of being speculative. This deprived real economy of the necessary money for productive investments and created a spiral of false expectations and fortunes.

Usually we forget the past and his valuable lessons. Let us hope that this will not be the case. At the beginning of the world economic crisis in 1929 everybody was speaking about an overheated economy, overproduction and the need to let the free market forces regulate the game.

This policy has quickly transformed the Wall Street collapse from Black Friday 1929 to a world economic crisis that pushed the world into the Second World War, communism and Nazi experiences. In 1930, British economist John Maynard Keynes decided, as he put it, “to give 30 more years to capitalism” and he wrote his ideas about a general plan to put in motion the world economy. The rest is history. His ideas became the Roosevelt plan that helped the US recovery and then the world recovery.

Today we see the same false prophets preaching about Adam Smith invisible hand and rejecting state’s involvement in economy and creating a general plan to stop the world crisis, repeating the same mistake over and over again.

Keynes explained in his times that the economy could not possibly overheat when only 300 million people lived in developed countries in 1929 of a total of 2 billions. What was true in 1929 is true to this day. Keynes’ simple, but revolutionary idea was that capitalism must embrace the poorest from western society into the welfare state. He created the consumption society, the dividends paid to employees, the financial support for private enterprises all that we take now for granted. Now it is the time for a new Keynes Deal at world wide dimensions.

The solution to our present day crisis is not far reachable as many want us to believe. And it is surely not the 700 billion Euro public money investments in private enterprises, mismanaged and abused and in paying huge dividends as golden parachute irresponsible directors. The 700 billion Euro bail outs will only maintain the corrupt system that lead to present crisis and will not help the economic sectors that need urgent investments. Such cash flow in an unregulated and inefficient sector, which had not been purged from the habits that destroyed it, is contra productive.

What we need now is an increase in real economy investments, control on the markets, fiscal incentives to businesses and real economy. Consumption increase, blocking of speculative affairs that lead to the down fall of the system and supplementary taxation of speculative stock market exchanges and directing the money in investment projects. This 700 billion Euro bailout could be put to far better use in real market.

It is definitely not dying. Capitalism is good in promoting development and increasing economy and while we have 2/3 of the world population living in poverty we need capitalism. When 99 per cent of the economies will reach development we can start worrying. But what we need is a new Keynes deal, to involve in the market the 4 billion people left out. Such a project needs world cooperation and investments directed at peoples not at states.

Angelos Angelopoulos, former chairman of Greek National Bank designed a plan for such a new deal based on international support. He thought about directing 0.7 per cent of industrialized countries’ GDP to this purpose, by initiating a one dollar tax on oil barrel, a 3 per cent tax on gold market and a 3 per cent tax on speculative financial business. According to same calculations these taxes could offer collect over 150 billion Euro every year, which can be used for World Development Program.

Unfortunately such a plan was not possible in 1929 and the world experienced more then 4 years of economic crisis, during which millions of people became homeless and the two greatest threats to democracy: Nazism and communism almost controlled Europe avoided turning Keynes’ plan into reality. Only at the defeat of Germany the Marshall plan, Keynes’ vision became reality in Europe also.

The current financial crisis is still too weak to cause a new change in our economic system, but the solutions are present and feasible and the reality will force us sooner or later to put them in practice. ( By Professor Anton Caragea PhD, MA, FINS ) 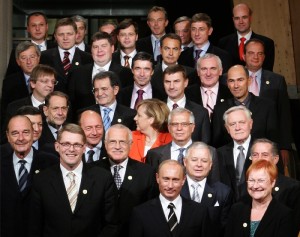 This entry was posted on Sunday, March 1st, 2009 at 8:11 am and is filed under economic crisis, Economy, elections, History, Information, News, Politics. You can follow any responses to this entry through the RSS 2.0 feed. You can leave a response, or trackback from your own site.