President Professor Dr. Anton Caragea was the first world leader to offer his congratulations to H.E. Academician Hun Sen, Prime Minister of Cambodia after the landslide victory that confirmed him to retain premiership for another five years. 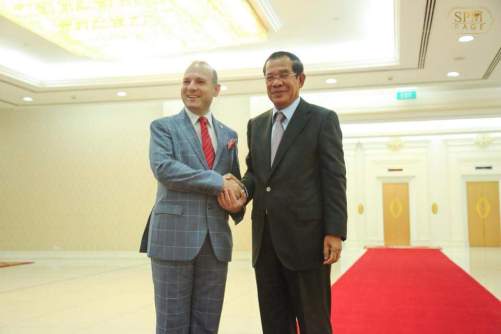 President Professor Dr. Anton Caragea to Prime Minister Academician Hun Sen: electing you at the helm of the country, the people of Cambodia had made the wise choice of development and growth and democracy against war, disaster and incertitude.

The congratulatory message reads: On the occasion of Your victory on the VI NATIONAL ASSEMBLY election and Your re-election as Prime Minister of Kingdom of Cambodia, I want to express the international community and academic community warmest appreciation for the overwhelming support manifested by the people of Cambodia for your agenda of transformation and development.(..)

Electing Your Excellency at the helm of the country, the people of Cambodia had made the wise choice of development and growth and democracy against war, disaster and incertitude.

The free and democratic elections have given Your Excellency the full mandate to reshape Cambodia and to continue to provide leadership and opportunities for the people of Cambodia.

Your Excellency, I strongly believe that you would extend your continuous support and cooperation to the promotion of peace, political stability and development of Cambodia.

In his replay, Prime Minister Hun Sen expressed his: gratitude for the cordial message of felicitations that you kindly extended to me personally and the Cambodian people`s party…your witnessing and assessment on the national election have certainly reflected a strong credibility of Cambodia`s electoral process in a peaceful, smooth, free and fair manner.

This is a justice you have given to the people of Cambodia to demonstrate to the international community the genuineness of the functioning democracy in Cambodia. Your Excellency, I strongly believe that you would extend your continuous support and cooperation to the promotion of peace, political stability and development of Cambodia.

President Dr. Anton Caragea message was the first to reach Samdech Techo HUN SEN, Prime Minister of Cambodia after the victory in the elections of July 2018, elections considered as the most democratically in the kingdom history.

Chinese President Xi Jinping said he is glad to see that in recent years, under the leadership of Hun Sen, Cambodia has achieved political stability, rapid economic development, continuous improvement of its international status, and gratifying achievements in various fields.

The July 29, 2018, parliamentary elections have concluded with a rate of participation of 83% and were supervised by 160.000 internal and international electoral monitors from 56 countries.

The photo-journals of the Electoral Monitoring Mission for Kingdom of Cambodia Parliamentary Elections are available here:

Information about July 29, 2018 VI NATIONAL ASSEMBLY ELECTION in Cambodia can be accessed here:

H.M. KING NORODOM SIHAMONI WEIGHTS IN: CAMBODIA IS HAVING FREE AND FAIR ELECTIONS!

Supervising the elections in any country in the world is a momentous and difficult task and not to be taken lightly.
You have to observe the present, but with responsibility for the future and impartiality in your heart.
If you are supervising elections in Kazakhstan, the heart of Central Asia, the task is doubled in significance, as Kazakhstan has become an example in the world.

Kazakhstan has carved himself in the centre of international politics, the host of international meetings destined to bring peace and dialogue in the world, the place where technology and tradition meets and the mediator between developed and developing countries, a place where East and West can build a bridge for dialogue.
Observing elections in such a key country it is an honourable and full of seriousness assignment.

For all this reasons, the invitation offered to me, on behalf of Ministry of Foreign Affairs of Kazakhstan, to observe the elections in the country, as an international observer, was a very challenging one, but nothing has prepared me for the phenomenon I was about to witness.

In Kazakhstan, on 26 of April 2015 I was witnessing the maturity exam of a people.

Born only in 1991, on the ruins of former Soviet Union, Kazakhstan was a young nation, a country only developing his democratic institutions and credentials. 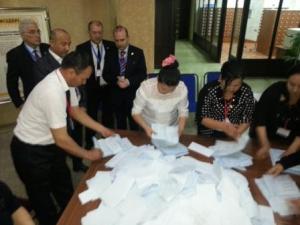 After the early presidential elections held on 26 April 2015, we can safely conclude that this stage was phased out.

With a record presence at poll, of over 95%, people of Kazakhstan proved, without a shadow of a doubt, their commitment to free and fair elections, to build and uphold a democratic society.

While other nations are struggling to bring their electors to the urns and millions of voters disappointed by corruption and state inefficiency are feeling disenfranchised, in developing Kazakhstan millions of electors proved that democracy is not just an empty word to find in the political text books, but a living reality.

I have the pleasure of seeing the people of Kazakhstan taken their future in their hands and voting for their future development, for practical solutions, for experience to weather out the economic storm that is rummaging the world.

The elections in Kazakhstan where not just a democratic exercise, but they where the proof that the peoples power really exist and if the citizens are feeling involved in the economic, social and cultural life of their country, if the state is not failing them and provides the social benefits expected the people will respond partaking in the electoral process.

In the economic and political failed states of the world we can see the reduction of election attendance, the disinterest of the citizens and the broken down of the social contract that Rousseau and French revolutionaries had considered as the fundamentals of the state. 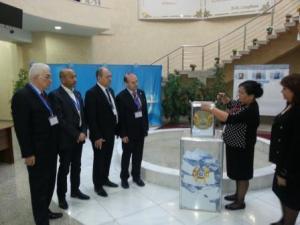 Kazakhstan state is honouring his social contract with his citizens and the response is this huge electoral participation.

95% electoral attendance can be a mystery in states where citizens are isolated and oppressed, but this is a reality in a functional nation.

In Kazakhstan, the 2015 elections where a national plebiscite in which the people decided above anything else their future.

I have observed this reality as hundreds of thousand of peoples turn out to vote accompanied by children’s and small infants, as they realized that it is not so much a vote for next few years, but a vote for future, for peace, for continuous democratic development and economic achievements.

Kazakhstan’s 2015 elections where undoubtedly democratic in nature, where fair and crystal clear transparent and where offering a few refreshing news for everybody.

On the fore is the news that democracy can be a real practice, can involve a nation that is educated and convinced of his role in history.

At the same time it was proven the fact that: governments and peoples are not confrontational actors on political arena, but they can cooperate to build a powerful country.

26 of April 2015 early presidential elections of Kazakhstan where the irrefutable proof of this self evident truth: that democracy can only work when all the people are involved.

International Election Monitoring Group, President Anton Caragea | Tagged: 26 of April 2015 early presidential elections of Kazakhstan where the irrefutable proof of this self evident truth: that democracy can only work when all the people are involved., a place where East and West can build a bridge for dialogue, as Kazakhstan has become an example in the world, EDA is elected head of International Election Monitoring Group for 2015, FINS, International observers are supervising elections urns opening, Kazakhstan, Kazakhstan has carved himself in the centre of international politics, MA, Ministry of Foreign Affairs of Kazakhstan, professor Dr. Anton Caragea, supervising elections in Kazakhstan, SUPERVISING ELECTIONS IS A MOMENTOUS TASK SAY PROFESSOR DR. ANTON CARAGEA-HEAD OF INTERNATIONAL ELECTION MONITORING GROUP, the heart of Central Asia, the host of international meetings destined to bring peace and dialogue in the world, the place where technology and tradition meets and the mediator between developed and developing countries, the task is doubled in significance |