In September 2011 Tajikistan will mark the anniversary of 20 years of independence. It is a moment to contemplate with proud, as the country succeeded, in a short span of time, to build an independent administration, a powerful army, a strong economy and a society of social equilibrium and respect for citizen’s rights. Especially the years of mandate of President Emomali Rahmon had paved the way for asserting Tajikistan role on international arena, for supporting the tajik art, culture and historic patrimony resurgence and are undoubtedly a renaissance era in the history of people of Tajikistan. 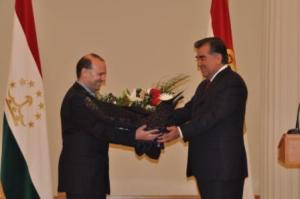 This astonishing achievements in a difficult region could not have being possible without a powerful cultural base and a long tradition of statehood, of bright civilization and a rich history that proved that Tajik people are creators of wonderful crafts and arts. Tajikistan history is not confined to the last 20 years; Tajikistan must be reminded is the place of birth of fabulous Oxus Treasure that highlighted the heritage of Persian Empire and the craftsmanship of tajik ancestors.

Tajikistan is also the birthplace of Zoroastrism, faith that build an empire of fire worshipers and high moral beliefs from Tajikistan to today Pakistan and Mediterranean Sea.

Just a short counting of the Empires that have their political and cultural center in Tajikistan is impressive: Samanids, Ghaznavids, Kara Kitai, Mongols, Khorezem, and Timurid etc.  Putting in the spot light this heritage, offering to the world the information`s necessary to understand that Tajikistan is one of the top art and civilization creators in the world, with an important contribution to world heritage, it is a necessity. To respond to this necessity the Minister of Foreign Affairs of Tajikistan, the fine intellectual Hamrokhon Zarifi had succeeded in collecting with a passion of the art collector  and the knowledge of the historian, documents, astonishing images and pictures of tajik arts and crafts trough centuries.  The result is a monumental book: TAJIK ARTS AND CRAFTS TROUGH CENTURIES offering, in the front of the surprised and unfamiliar reader, the images of a rich culture and of an ingenious and extremely talented people that leaved a clear mark on history.

The monumental masterpiece TAJIK ARTS AND CRAFTS TROUGH CENTURIES is at the same time: a complete inventory of art treasures and creations of tajik people, an exhaustive image of the traditions and historical influence of the tajik craftsman over the arts in all Central Asia and a repertoire of historic discoveries on the territory of republic of Tajikistan. In 19 chapters, like on a flying carpet, the avid reader will familiarized himself to the impressive art and civilization of tajik people.

The books succeed the rare achievement of analyzing, through impressive photographs and clear descriptions, not only the art of tajik`s, but to related this with the history and with geography of the country. A chapter of embroidery will present you the intricate and luxurious tajik patterns, full of gold and precious colors. I will draw the attention of the readers to models showing the influence of tajik art on the Khorezem art (XII-XIII century) and Safavid Persia, moments when tajik art influence spreads from the banks of Amur Daria to Caspian Sea and Persian Gulf. The gold embroidery and jewelers design will prove that tajik craftsman and tajik patterns conquered the imaginations of the rulers of the world. From the Omayyad Court in Baghdad to the Chinese Emperor court the luxurious models of tajik arts and tajik specialists where attracted to the Asian imperial courts as a proof of the ingenuity of tajik craftsman`s.

Reading the attentive historical and ethnographical explanation of the book, admiring the picturesque images included in the book you cannot wonder how Tajik people succeeded in making the transition from the small art, ephemeral art of cloth and house art, to the impressive big art, ceremonial art of palaces, governmental houses, summer houses and decorative architecture.

I cannot appreciate enough the legacy that a monument like Mir Said Hamadoni Tomb in Kulab is offering to the world: the architectural solutions used in this monument are a proof of the independent mind and wealth of knowledge of tajik builders and the intricate models of designed used to decorate the monument, to recreate the image of Islamic paradise cannot be matched.

It is also an important achievement of this book that is uniting the legacy of the past with the present day creations of tajik crafts and art makers that proof that the ancestors magic and craftsmanship is not lost and even today tajik people can create masterpiece of world level.

Kurramshahr Entertaining Center or Varzob Government Country residence are impressive paraphernalia, witnessing that tajik art is re-living today a new epoch of glory and recognition. The capacity of integrating the art monuments in the nature is one of the key of tajik success in art and resilience trough the centuries and Varzob Palace is a symbol that this capacity is not lost but is living again in the soul of tajik craftsman. The same is valid for the famous Teahouse in Khorugh that elevated wooden crafts to mastery creating a wood marvels that astonish by beautiful model the researcher of today arts phenomena.

TAJIK ARTS AND CRAFTS TROUGH CENTURIES it is a successful claim to international recognition of Tajikistan art, as a role model for the world and as an intrinsic part of humankind patrimony.

This book is the perfect gift for 20 years of independence anniversary of Tajikistan, announcing to the world that Tajikistan it a cultural patrimony household name, with a history dating back to more than 2.500 years, a country that made a powerful contribution to humanity patrimony and can stand with the head high and say: Tajikistan is a name that will always be recognized as the cradle of civilization.