During the European Council on Tourism and Trade (ECTT) official visit to Ethiopia, ECTT President, Professor Dr. Anton Caragea, met with Prime Minister Hailemariam Desalegn, Foreign Minister, Tedos Ghebreyesus, State Minister, Berhane Gebre-Christos, Yaekob Yalla, Minister of Trade and Minister of Culture and Tourism, Amin Abdulkadir, to create a climate favorable for tourism and trade development and for awarding to the people and Government of Ethiopia, the world most important recognition for tourism advancement-WORLD BEST TOURIST DESTINATION AWARD FOR 2015.

On the landmark occasion, of the universal proclamation of World Best Tourist Destination for 2015, a top ranking delegation from European Council on Tourism and Trade was invited for a discovery tour of Ethiopia, the receiver of this year most influential tourism designation.

We are WORLD BEST TOURIST DESTINATION is the hymn of Ethiopia ! A perfect song for a perfect destination!

The visit took place between 9 to 15 July, 2015 and included an important political and diplomatic dimension, with European Council on Tourism and Trade President -Professor Dr. Anton Caragea holding discussions with Minister of Trade-Yaekob Yalla, Minister of Foreign Affairs-Berhane Gebre-Christos and H.E. Amin Abdulkadir – Minister of Culture and Tourism of Federal Democratic Republic of Ethiopia and an inclusive and profusely dialogue with Prime Minister of F.D.R. Ethiopia- Academician Hailemariam Desalegn. 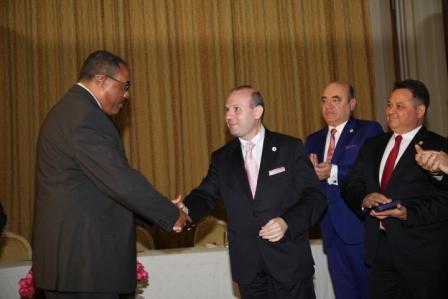 Ethiopia tourism is having a perfect future ! with the hand shake between Prime Minister of Ethiopia-Hailemariam Desalegn and ECTT President-Professor dr. Anton Caragea.

The inclusive dialogue, concentrated on promoting bilateral trade, investment and economic cooperation, supporting business people and firms from both regions in cooperating and promoting the exchange of techniques, skills and economic goods. 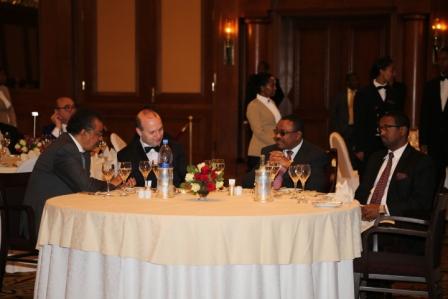 On diplomatic arena a cooperation and further developing of honorary consul’s network across the world, was established, with a view to foster tourism, cultural and economic cooperation.

Creating a network of Ambassadors for Tourism and Culture, promoting tourism and the image of Ethiopia, where also tabled, based on other successful examples of actions of tourism promotion carved by European Council on Tourism and Trade.

During his official visit, Professor Dr. Anton Caragea met for an extensive dialogue Prime Minister Desalegn Hailemariam, who, on the occasion of WORLD BEST TOURIST DESTINATION CEREMONY FOR 2015, was presented with the WORLD LEDERS OF TOURISM LETTER of European Council on Tourism and Trade, calling on Heads of States and Government to “promote peace and world development via the tourism sector”.

ECTT and Ethiopia have agreed to reinforce their collaboration in the areas of tourism promotion, management of tourism product development, and cultural marketing strategies, as agreed in the discussions between Professor Dr. Anton Caragea and the Minister of Tourism and Culture of Federal Democratic Republic of Ethiopia, Mr. Amin Abdulkadir. 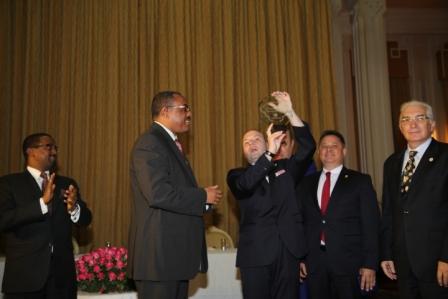 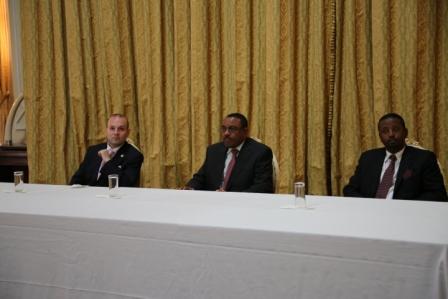 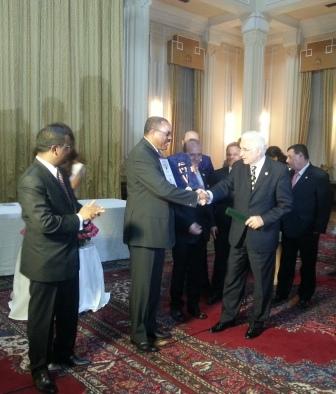 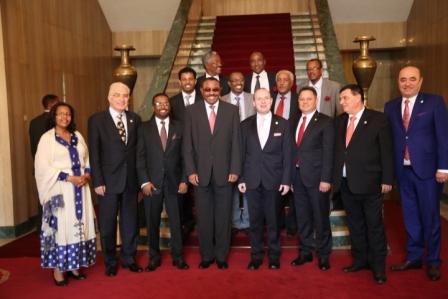 The ceremony for World Best Tourist Destination in 2015 was live broadcasted and viewed by more than 200 millions viewers and will continued to be presented across Europe for the next year. 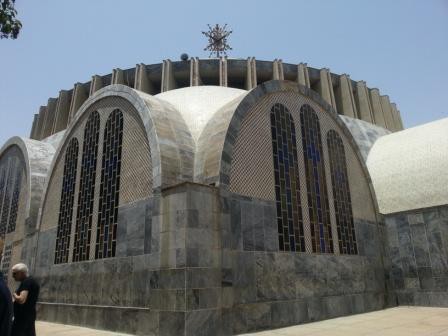 Axum Cathedral: the place of coronation for Emperors of Ethiopia. The last emperor to be crowned here was Haile Selassie I

From 10th July, the European Council on Tourism and Trade President and his delegation embarked in a cultural and tourism program visiting Axum-the first capital of Christian Africa and the centre of a world power in 100 to 400 BC that controlled trade across the Read Sea. 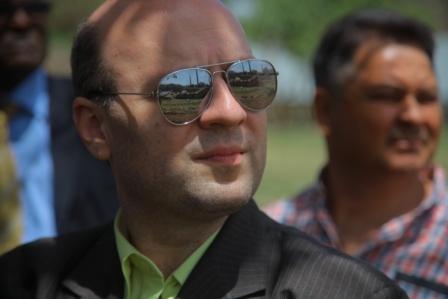 In Axum, the delegation visit the royal tombs, the Church of the Arch of Covenant, the Saint Mary Imperial Basilica, where the emperors of Ethiopia were crowned.

Specially for European delegates, were opened the gates of the imperial museum, containing the priceless treasures of ten Ethiopian emperors from garments, to crown adorned with jewels and the robes used for imperial investiture. 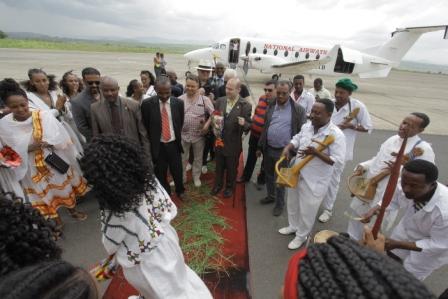 From Axum, the old imperial city, the delegation led by President Anton Caragea has being directed to Gondar, the capital of Ethiopia from XVII century to XIX century.

Here they have a chance to admire the fiery Amharic dances, in a wonderful welcoming ceremony, offered by the local authorities, enjoyed the fabulous gondarine cuisine at famous Four sisters’ restaurant and toured the imperial city. 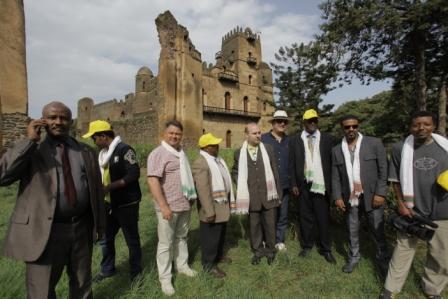 European Tourism delegation is touring the outstandingly preserved Imperial compound of Gondar- Ethiopian empire capital from 17 to 19 century. Behind is the the world famous Fasil Ghibli-Palace of Emperor Fasilides.

Gondar is also world renamed for his architecture and for housing almost ten emperors, in a period of glory for Abyssinia, as Ethiopia was known in that time.

Garnering Portuguese influence, with Indian and English architectural designs, Gondar is nicknamed as African Camelot for his strange, but perfect architecture. 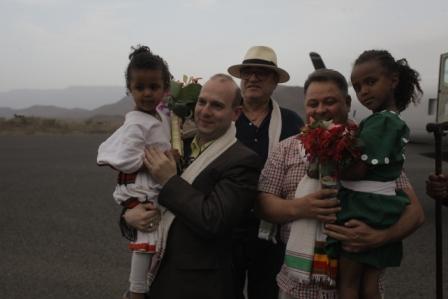 European Council on Tourism and Trade delegates were received with a religious ceremony in Lalibela, the holiest Christian city in Africa and the second Jerusalem, as in worldly known.

More than 5000 pilgrims, priests and deacons, welcomed President Dr. Anton Caragea and offered to him and his delegation, special ceremonial robes, to mark their entrance in the holy city. 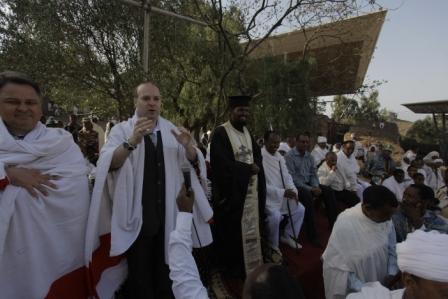 On this occasion, President Anton Caragea held his gratitude speech known as: To The People of Lalibela, a discourse that quickly captured the imagination of the inhabitants of Lalibela.

An impressive tour of six of the eleven rock hewn churches was conducted, including the famous grave of Saint Lalibela, the church of Medhane Alem (Our Saviour) and Holy Cross Church. 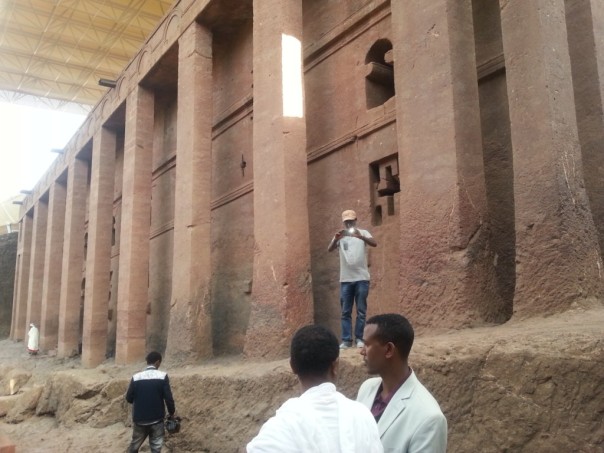 Lalibela is a city greater than words, nothing can prepare you for his atmosphere and nothing can describe it!-President Professor Dr. Anton Caragea.

In the final leg of the trip, European Council on Tourism and Trade President and his party were treated with a wonderful welcoming to the bustling and sunny south of Ethiopia and with his famous Lake District city of Hawassa.

The delegates were welcomed to music and a fire display by the head of Southern Nations, Nationalities and Peoples Regional State of Ethiopia and enjoyed a tour of Lake Hawassa, a discovery of the city landmarks and a special night show that touched their hearts. 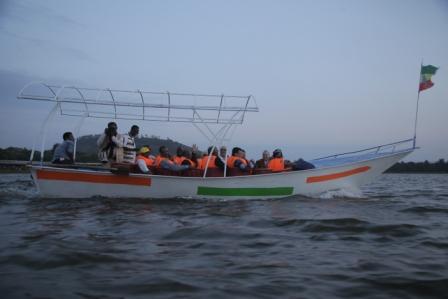 The Rift Valley Lakes of Ethiopia are an internal sea, that can be perfectly used for tourism and leisure.

A special surprised was offered by HE. Minister of Culture and Tourism of Ethiopia, Amin Abdulkadir, who arranged for ECTT President Dr. Anton Caragea delegation a special discovery tour of Harar-the fourth most holy Islamic site. 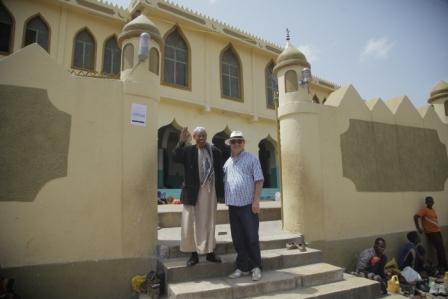 The city comprises more than 82 mosques and 4000 saints tombs known in the Islamic world as Medinat Al Awliya- the city of saints and a UNESCO heritage site.

The delegates were welcomed with a coffee ceremony and a tour of famous city enclosure, known as Jugal, and a visit to famous French poet Arthur Rimbaud house in Harar. 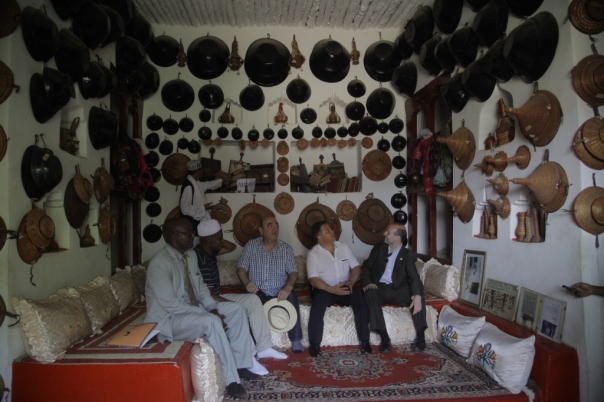 A short moment of tranquility in a dense schedule: in a famous traditional Gay Ger (house) in Harar.

The visit, to extraordinary city of Harar, was the perfect gift for our delegates, appreciated Professor Dr. Anton Caragea.

The European delegation official visit to Ethiopia is a sign of the country inclusive development, political, clout and prominence in Africa and a mark of the country taking the rightful place that is deserved amidst the most cultural and historical developed country in the world, concluded his remarks, President Professor Dr. Anton Caragea.

The Government of Ethiopia had succeeded in developing the country tourist infrastructure, in insuring security for tourism facilities and is proposing for the next year`s a number of strategic decisions to further develop the country’s tourism sector.

The Government of Prime Minister Hailemariam Desalegn is anticipating that tourism will become the main country foreign currency earner with the necessary investment in infrastructure, on destination promotion and product development, through the recently established Tourism Transformation Council.

Photo-Journal of EUROPEAN TOURISM ORGANIZATION-EUROPEAN COUNCIL ON TOURISM AND TRADE TO ETHIOPIA-WORLD BEST TOURIST DESTINATION FOR 2015. 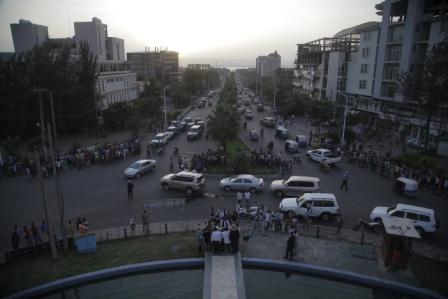 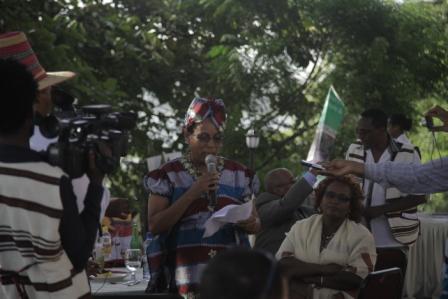 Mrs. Almaz Beyero-Head of Bureau for Culture and Tourism of SNNPRS 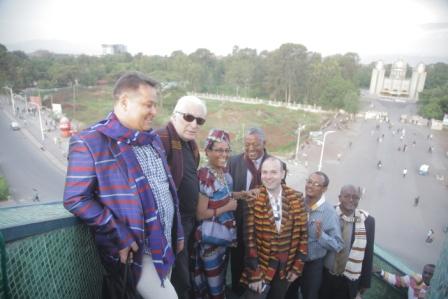 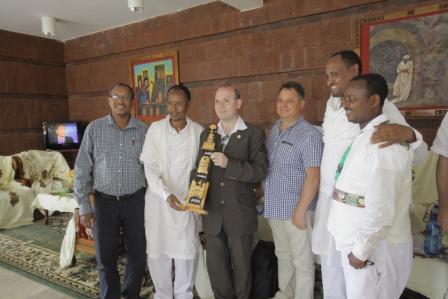 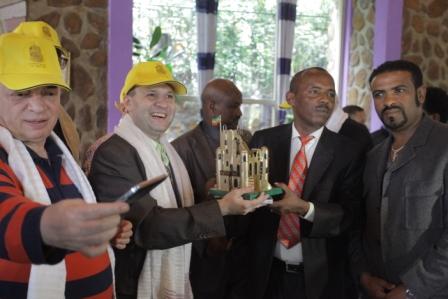 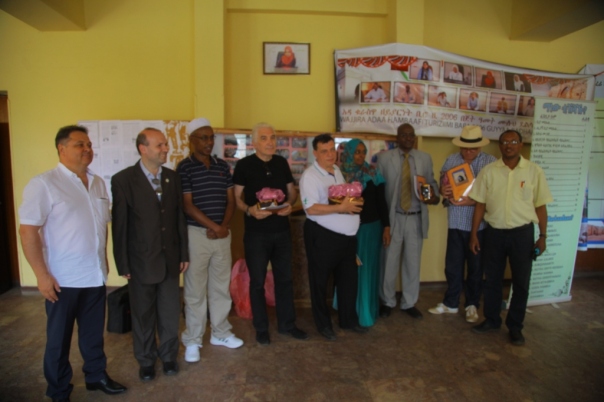 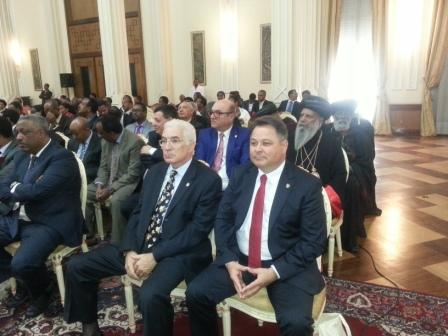 Supplementary PR information and photos can be accessed here:

Photo Journal of the visit of President Dr. Anton Caragea to Ethiopia

European Delegation Journal of Travel in Ethiopia on Pinterest