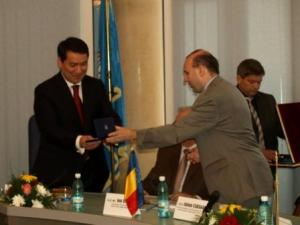 The conflict in Caucasus has proven that the European Union is unfortunately still in need of a coherent foreign policy. In March 2003, after the U.S.-led invasion of Iraq, EU member states decided in Brussels that never again would they be caught wrong-footed by international events. The result of this decision was the creation of the post of EU High Representative on Foreign Policy and the naming of Javier Solana as the czar of EU foreign affairs. But the Caucasus conflict proves that EU is still uncertain about its role in European affairs.

To craft a new status for the EU in the aftermath of this crisis, French President Nicolas Sarkozy requested an emergency meeting of EU leaders for September 1. It is time for Europe to keep its word and develop a coherent foreign policy. Such a bold initiative, however, requires a new agreement to replace the 1975 Helsinki Accords and address the new challenges to borders and sovereignty.

For its September 1 meeting and after, the EU must prove that it is capable of tackling sensitive problems in its own backyard without outside intervention. The most important item on the agenda will be countries like Kosovo, Abkhazia, and South Ossetia, which appeared on the world map only in the last six months. A second objective for European leaders is to strengthen the EU-Russia relationship.

The Caucasus crisis proves that the EU must be more engaged in international security issues and willing to assume peacekeeping missions not only in places like Lebanon but even in lands closer to home. In this process, the EU must find its own voice. Condemning Russia for its intervention turns the EU into a mere spokesperson for U.S. foreign policy rather than an independent entity. Moreover, if it doesn’t speak up in favor of the principle of territorial integrity, the EU itself will become vulnerable in the future.

Kosovo’s February 17 declaration of independence marked the birth of a new category for Europe after World War II: countries that have de facto sovereignty but not de jure status. These are virtual no-man’s lands. Kosovo’s independence was proclaimed in breach of both UN Resolution 1244 and the 1999 Rambouillet Accord that guaranteed Serbia’s territorial integrity. Also, Kosovo independence was against the UN Charter and the 1975 Final Agreement of Helsinki Conference that underlined the territorial integrity and security of European borders. Similarly, Abkhazian and South Ossetian independence are in breach of the UN Charter, the 1975 Helsinki Agreement, and UN Resolution 1808 that established the UNOMIG peacekeeping forces in Georgia in 2008.

All three countries establish a precedent that minority collective rights can prevail over national borders, territorial integrity, and the UN Charter. To accept this point of view is to open a Pandora’s box that will only unleash conflict and territorial claims all around the world. Minority collective rights will be a powerful rationale for large powers to intervene in what they perceive as their area of influence. Russia’s actions in Georgia are just such an assertion of regional power status.

Countries such as Kosovo, Abkhazia, and South Ossetia all contribute to the erosion of countries whose borders were internationally recognized and inscribed in the final act of the Helsinki Conference in 1975. If Europe doesn’t stop this proliferation of new countries, the epidemic will spread around the world. In Europe alone, the pursuit by minorities for sovereignty, as applied in Kosovo and Abkhazia, can be seen as well in Macedonia (with a large and concentrated Albanian minority), Spain (with the Basque and Catalan regions), and Belgium (with conflict between the Walloon and Flemish communities).

Europe is not the only continent with such ruptures. In South America, Venezuela is pressing for the creation of the so-called Rupununi state in Guyana; in Mexico the Chiapas Indians have been pushing for an autonomous state for more than 60 years; in North America, Québécois independence is a dream never forgotten. In Africa, too, civil wars have broken out as a result of separatist struggles, within Sudan (Darfur), Somalia (Somaliland), Congo (Katanga), and Nigeria (Biafra). Kurds push for independence in Turkey, and in South Asia the Kashmir cry for independence grows stronger every day.

In 1975, when the Cold War was far from over, the Helsinki Accords offered Europe a guarantee of peace and stability by confirming the borders of the old continent and establishing the way that new countries could be born. It was flexible enough to accommodate the dissolution of the Soviet Union, the Czechoslovakia partition of 1991, and the reunification of Germany. But the cases of Kosovo, South Ossetia, and Abkhazia have called into question the mechanisms of the Helsinki Accords.

The EU Summit on September 1 can not provide any long-term solution to this problem because almost half of Europe (in surface and population) are not members. These non-member countries are equally interested in resolving the crises of the no man’s lands.

Only a new international conference uniting all European countries together with Russia and the United States can reaffirm the Helsinki Accords and offer a solution to the present crises. Such an international conference is necessary to reconfirm borders and establish the principles by which further changes in Europe can take place. To continue on the present path, in which the United States supports Kosovo independence and Russia backs Abkhazia and South Ossetia, is to invite a large-scale, worldwide reinvention of borders.

Of course, a new Helsinki Accord could not be reached in a month. The initial conference required more then three years of preparation. But in the meantime we should establish a freeze on the recognition of new states and a general reinforcement of the principle of territorial integrity. In his August 26 speech, Russian President Dmitri Medvedev agreed to an international solution on border issues. The EU must follow suit and begin to draft a new Helsinki Accords on post-Cold War borders. On September 1, Europe must establish a new voice on international issues or it will no longer matter on the international stage.